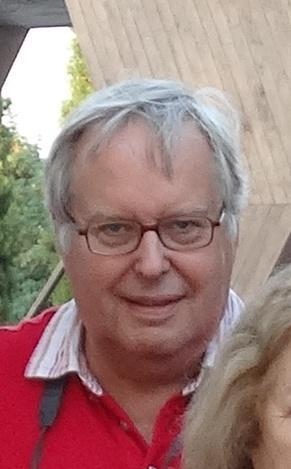 What I went on to do:

What I do now:

In May 1955 my family moved to the Claremount Road area so I spent a few weeks at St. George’s Infants in Miss Kingston’s class which was located in the main school building, presumably because there was no room in the Infants’ School.

Year 1 – Mrs Thomas – best remembered for dividing the class into four American-Native tribes, we called them Indians in those days. I was in the Dakotas which was supposedly a “bad” tribe. She organised various competitions, based on the standard of our class work, and awarded each tribe “points” according to the quality of our work.

Year 2 – Mr. Gethin – a good man and one of the younger teachers.

Year 3 – Mr. Woolley. For this year we were in the “huts” near where the Wallasey Village Group Practice is now.

Year 4 – Miss Merrick – in whose class we did endless mental arithmetic lessons which was good for me as I later became an accountant.

Most weeks we had an afternoon at the Guinea Gap Baths – in fact most of the children in Wallasey in those days had learned to swim there, but after school hours. However during school afternoons we just did what we wanted – swim, splash around, jump in. There were no formal races or competitions. We went to and from the baths in one of those famous yellow double-decker buses with Wallasey Corporation Motors on the side.

In years 3 and 4, i.e. 1957 to 1959 we played football from September to April, as long as the weather was fine. So one afternoon each week we walked down Leasowe Road to the playing fields of St. George’s Secondary Modern School. Once inside the school gates we walked along a cinder path with Barker and Jones brick works on the right, and also a pumping station which presumably pumped water from somewhere to somewhere else. We arrived at the changing rooms, a rather run-down building, which presumably had seen better days. The facilities there were rather spartan and dusty. I don’t think we ever had a shower but somehow cleaned off the mud at the end of the game and returned to school. I believe there were matches against other schools from time to time but I never got into the school team.

In the summer term we played cricket there.

The girls remained at school and did needlework, I think.

On 11 July 1957 the Queen and the Duke of Edinburgh paid an official visit to Wallasey as part of their tour of Cheshire. The Royal train arrived at Grove Road Station and the Royal route was lined by school children followed Harrison Drive, King’s Parade, New Brighton, Seabank Road, to the town Hall where presentations were made. The Royal party then went on to Birkenhead.

We at St George’s were positioned along the promenade near Harrison Drive. As usual with these events, there was a lot of waiting involved, it was also raining, but eventually Her Majesty’s Rolls Royce came into view and we all cheered and waved our Union Jacks. It should be remembered that the Queen was only aged 31 at that time, younger than most of our mothers!

In year 3, Mr Woolley organised a visit to Speke Hall, Liverpool for our class. Transport again was in one of the yellow double-decker buses. Before the trip, my parents kept reminding me that on a previous family visit to the Hall, when I was about four, I had become rather upset when the guide started telling us that a certain room was said to be visited by a ghost from time to time. So I was a little bit apprehensive about a return visit, although now, aged nine, I did not really believe in ghosts. True to form, our guide repeated the story of the ghost but this time I managed to keep my composure. I have just checked on the “Internet” and indeed Speke Hall is indeed reputed to be haunted.

In year 4. my last year at St. George’s Primary, there was a trip to North Wales on 4 June 1959. The details are lost in time but I think we boarded the usual Wallasey double-decker buses which took us to Birkenhead Woodside Station, now long disappeared but which was a busy station with trains to Chester, North Wales, and even London Paddington Station. We got on a special train which took us to Caernarvon via Chester and Llandudno. At Caernarvon we boarded coaches which took us into Snowdonia. We had our picnic lunches by the lake Llyn Gwynant. It was a miserable day with plenty of rain and mist but at least it did clear for a bit and we saw the top of Snowdon. After lunch we returned to Caernarvon where we visited the castle and eventually caught the train back to Birkenhead, by which time the sun had actually come out.

Edward in 1959 & a few shots from a Caernarvon School Trip 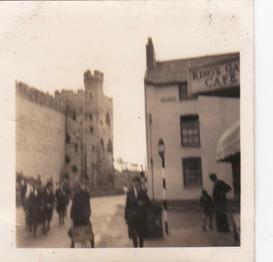 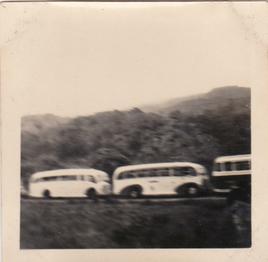